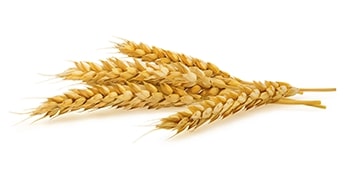 Wheat, any of several species of cereal grasses of the genus Triticum and their edible grains. Wheat is one of the oldest and most important of the cereal crops. Of the thousands of varieties known, the most important are common wheat (Triticum aestivum), used to make bread; durum wheat (T. durum), used in making pasta (alimentary pastes) such as spaghetti and macaroni; and club wheat (T. compactum), a softer type, used for cake, crackers, cookies, pastries, and flours. Additionally, some wheat is used by industry for the production of starch, paste, malt, dextrose, gluten, alcohol, and other products. For treatment of the cultivation of wheat, see cereal farming. For the processing of wheat grain, see cereal processing. The wheat plant has long slender leaves and stems that are hollow in most varieties. The inflorescences are composed of varying numbers of minute flowers, ranging from 20 to 100. The flowers are borne in groups of two to six in structures known as spikelets, which later serve to house the subsequent two or three grains produced by the flowers. Though grown under a wide range of climates and soils, wheat is best adapted to temperate regions with rainfall between 30 and 90 cm (12 and 36 inches). Winter and spring wheat are the two major types of the crop, with the severity of the winter determining whether a winter or spring type is cultivated. Winter wheat is always sown in the fall; spring wheat is generally sown in the spring but can be sown in the fall where winters are mild.